Lots to do in the polytunnel with pricking out and sowing more seeds. Lovely fresh scent of growth and greenery. 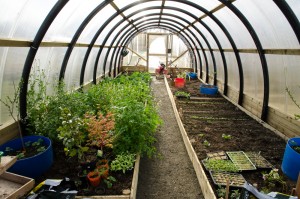 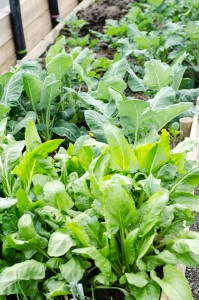 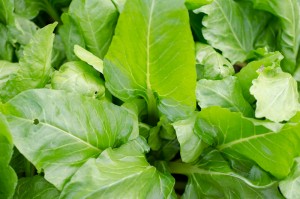 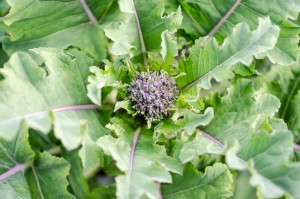 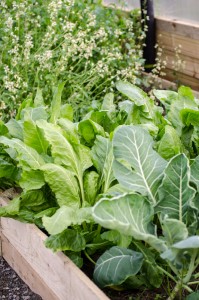 Seems odd to be having a glut of green leaves in April.

This is what we woke up to this morning – it is stunning and makes me feel so happy – I should go and live in Alaska! 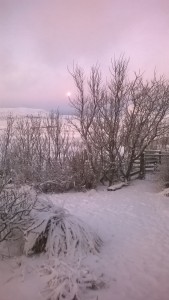 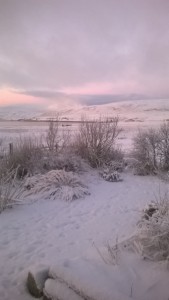 Had to try my new handmade paints from Greenleaf & Blueberry, only bought 5 but don’t need many more for landscapes.

Little (5 x 8 inch) test piece on crappy paper, but I do like the colours.

Just completed a graphite exercise from my botanical art course. We were asked to draw a simple leaf or flower and use the stippling technique for the shading. I had to attack my african violet plant with a knife to use one of its leaves for the exercise as we are supposed to use live specimens and there are absolutely no fresh (or otherwise) flowers here at this time of year, so it had to be a house plant.

I’ve never used stippling to this extent before and though quite time consumming it was strangely therapeutic. I like the effect and will be exploring this in the future. 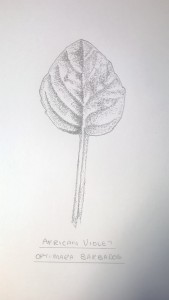 My new handmade (by Jess Greenleaf) paints have come, all the way from America – this is for my limited landscape palette. I have a different palette for botanics and other loose style painting, mostly using Winsor and Newton watercolours. 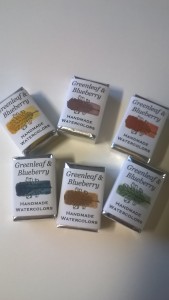 Well January has passed and its nearly spring (haha), with newly germinated leek, viola, celeriac and calendula seeds in the polytunnel. The sheep and chickens are not enjoying the weather or the mud but the goats are thriving – they are lucky to be housed in a dry byre with lots of straw and food to eat.

So I’ve begun an online botanical art course (should have done this years ago) I have high hopes for this one. Heres a pic of something new I’ve learnt – hand sharpening my pencils. I think they look neat. 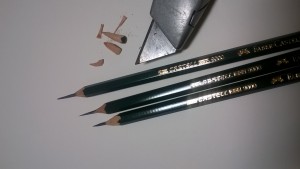 Last weekend saw assorted members of the family make the winter journey up to North Roe – some flying, some on the overnight ferry and some just 45 miles away in Lerwick. Thank you everyone for making the effort of the trip to make Croftmas very special. Croftmas is a biannual event where we all get together with turkey and all the trimmings (thankyou Sly) usually a couple of weeks before the 24th, so that Tom and Anya can spend Christmas with their partners families. Next year its our turn for a family Christmas. 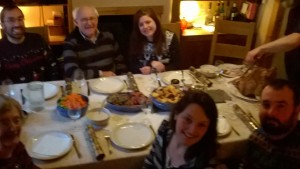 I bought Tom and Jilll some new Christmas jumpers and unbelievably they’d bought the same jumpers for themselves a couple of weeks earlier and were proudly sporting them on the day! There was a lot of hilarity when they opened their parcels! 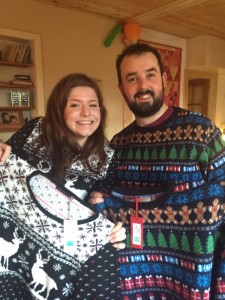 We raised a couple of bronze cross turkeys (Sly and Robbie), they grew incredibly large only just fitted into the oven. Of course we didn’t know the weight of them so the cooking time had a huge question mark around it. However they turned out really well, we used the meat thermometer and everything came together. The pic is a bit blurred and doesn’t do the size any justice. 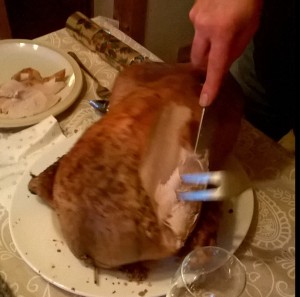 Some little cards I’ve been working on, this is the background which I’ve already felted and stitched on the machine. 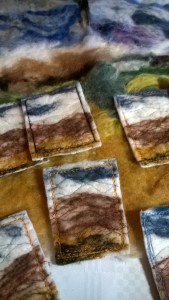 I’ve needle felted a little Shetland croft house onto each one, attached that to a felt backing and then glued the whole thing to a card blank. I chose the kraft buff blanks and envelopes and some white blanks. 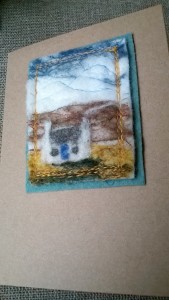 Thought I’d list them in Etsy and http://www.shetlandmarket.com/ which I’ve been selling in for a while. An eclectic assortment of talented (myself excluded) artisans some of whom I know very well.

The light is really starting to fade fast here and these last couple of weeks its been difficult finding a day that has enough light to take a decent image of the products I’ve made. Being more arty than teccy I’m not that good when it comes to making all the necessary brightness/contrast adjustments, so I tend to leave it although one of  the two pics above has been ‘doctored’. I’ve hurt my neck and am struggling to do what I normally do without pain, numbness and pins and needles in my right arm. It seems to be taking an age to clear up and is leaving me somewhat museless, thats museless but actually take away the m and I am quite useless as well. Hammering metal is out of the question as is carding fleece and I just don’t feel inspired to work with polymer clay. I am able to do small amounts of needle felting, more on that later but I thought I’d post a picture of the new path to the polycrub that was finished yesterday (not by me). Granted there is still an amount of tidying up to do and the yellow flag iris needs to be tamed but now we have a dry, mud free path to and from the PT.  The courgettes are thriving despite the cold summer and we’ve started eating them with bacon and new potatoes. I’m really pleased with the fuchsia hanging basket, its starting to look the business! It was actually very sunny this morning when I took the pics so unfortunately the colour is a bit washed out but hey the suns out.

Well they’re not really related I just thought I’d bunch them together for the sake of this post. But I do suffer with IBS and have an issue with insoluble fibre, you know wholegrains. So I wanted to be able to include more of the good soluble fibre (beans) into my diet on a regular basis and came up with this idea – cannellini bean and mushroom pate. I sauted mushrooms in a pan and mixed in some previously cooked cannellini beans, added seasoning and small amount of crumbled vegetable stock. Once mixed I took half the portion out of the pan into my processor and blitzed them into a smooth paste. I added some curry powder to the remaining half and blitzed that too. Then spooned an equal amount into little pots and kept one pot for the fridge and toast in the morning and the other pots for the freezer. We took just about 600gms  of freshly picked, cleaned and sliced gooseberries and put them in a large kilner jar, added about 300gms of sugar and topped up with vodka. Need to leave a 3 cm gap at the top so we didn’t use up a whole 1ltr of vodka. Give this a good shake and then shake daily until all the sugar has dissolved, then leave to mature until Christmas shaking occasionally. Apparently the flavour improves if left longer.